This post is not a hardware post, but just a simple way to use a smart plug to replace a conventional smart power strip to avoid unneeded standby power consumption. For my home entertainment system I previously used a conventional smart power strip, but it caused several crashes of my media center, a Raspberry Pi running Kodi. So I decided to replace it with a standard power strip connected to a smart plug, and let openHAB do the magic.

I decided to use a ZigBee smart plug due to low power consumption and since already having a Philips Hue bridge within range. I went with an Innr smart plug, since the Philips Hue smart plug hadn’t been introduced at the time.

As trigger for turning power on or off, I went with my Harmony Hub. This way I can also turn off the network switch, since the Hub is Wi-Fi connected. When any activity is started, requiring any of the powered off devices, I’ll simply turn on the smart plug. When powering off, I need Kodi to shutdown and wait for this. So here are the rules I ended up with:

I might look over-complicated, but I wanted a defensive approach to make sure everything is done to not trigger data corruption when power is taken from the Kodi Pi without proper shutdown. For example, if the Pi is still booting when TV is turned off, it won’t be able to accept a shutdown command yet, so I’m waiting for it to complete booting. Also, in case the TV is turned on again while the Pi is shutting down, I try to boot it again by turning it off and on again.

I recently purchased a new LG OLED65C8 TV and with it a SanDisk Extreme Pro USB 3.1 SSD drive with a write-speed up to 380 MB/s, after reading these recommendations. I wanted to use this for recordings and time shift (Live Playback). Unfortunately it doesn’t work with time shift – only recording. I sent a request to customer service about this, and conclusion is:

Update: I got a second response from customer service, and unfortunately – as I suspected:

I received twenty of the new GU4/MR11 bulbs from SunFlux a few days ago. Specifications:

I don’t have the equipment to test if the bulbs live up to the specifications, but at least one of the specifications is incorrect: It’s not an MR11 bulb. Well, sort of. Almost. I’ve never had any problem with halogen bulbs of any brand, but these bulbs are too large to fit into my spots. Bummer! A 1 mm difference would probably have made it possible to fit the retaining ring clips into the spot. 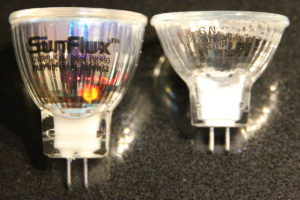 I actually received one of these, and four bulbs of the new version with these changed specifications:

So that’s how I found out – I didn’t get five identical bulbs, even though it was the same order. So they downgraded the CRI, but upgraded the efficiency a tiny bit. These bulbs are ugly, but at least they fit into standard MR11 spots. I’m not sure why they made a new version of the old bulb with almost identical specifications as the new one (except the lower CRI). We’ll see if part number 11015 is being phased out.